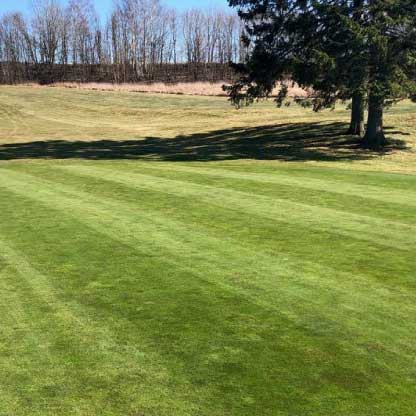 Indigrow launched Humik N25 back in 2015, as a new technology fertiliser based on humic acid. Early success with the product was found when applied after seeding or overseeding, where rapid germination was required.

Subsequently, trials were carried out to find out the effect of using Humik N25 as a dormant feed, which showed positive results. More information on these trials can be found on our earlier blog post: A Comparison of differing Nitrogen sources for use as early spring starter fertilisers

Jimmy Johansson, Head Greenkeeper at Motala Golf, has been using the dormant feeding technique for many years. We spoke to him about his use of Humik N25 as a dormant feed:

Indigrow: Why did you choose Humik N25 as your dormant feed?

Jimmy: I got the recommendation to use Humik N25 when I attended a seminar in 2019. I tried it for the first time in December 2019, with very good results in the spring of 2020.

Indigrow: Did the humic acid content in Humik N25 influence your decision to use this product as a dormant feed?

Jimmy: To a degree. We need to work to improve our soil structure in the greens so that´s a part of reason, but mostly I use Humik N25 for the high nitrogen content.

Indigrow: Is this the first time you have used the dormant feeding process?

Jimmy: No. I´ve been using dormant feeding for over 10 years but before 2019, I had always used products with a lower nitrogen content.

Indigrow: How important is dormant feeding to you?

Jimmy: Very. I´ve always seen a better start-up after the snow melts with dormant feeding then without.

Indigrow: Was the turf under snow for more or less time than usual this winter?

Jimmy: More than the year before. We had a snow cover for about one month in February and March, which highlighted the effect of using Humik N25 as a dormant feed.

Indigrow: Did you achieve the results you expected by using Humik N25 as a dormant feed?

Jimmy: Yes. I got a healthier and a better coloured turf after the winter.

As well as using Humik N25 as a dormant feed, the greens at Motala Golf Club have also had other Indigrow products applied after the snow had melted. A tank mix application of Solar N, Solar Ca+Mg and Fusion Liquid Fe all at 10lt/ha was applied as soon as the snow had melted, followed by an application of Optik Bronco at 1lt/ha and a further tank mix of Solar N and Solar Ca+Mg at 10lt/ha during the month of March.

Using the dormant feeding technique with Humik N25 in late 2020, followed be early season applications of Solar N, Solar Ca+Mg and Fusion Liquid Fe has left the course in great condition for what is expected to be a very busy season at Motala Golf Club.

If you have any questions, we're on hand to help!