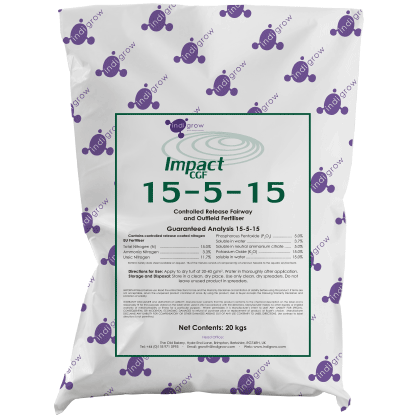 Our controlled release fertilisers (CGF) are all based on PSCU (polymer sulphur coated urea). Our PSCU fertilisers are coated to provide consistent nutrient release whilst the coating breaks down.

Slow and controlled release fertilisers reduce the speed of release of plant nutrients from fertilisers to the plant. This can be achieved by different means. With controlled release fertilisers, the principle method is to cover a conventional soluble fertiliser with a protective coating (known as encapsulation) of a water-insoluble, semi-permeable or impermeablewith -pores material. This controls water penetration and thus the rate of dissolution, and ideally synchronises nutrient release with the plants’ needs.

The use of controlled release fertilisers has increased over recent years not just due to the environmental benefits that they give but also for the economic and timesaving attributes. These specially formulated fertilisers are available with several technologies, one of which is the PSCU coating used in the Impact range.

Our polymer sulphur coated urea (PSCU) fertilisers are a hybrid of both sulphur and polymer options, known to us as PSCU.

The sulphur is applied initially as a thinner layer which reduces the chances of “lock off” which occurs when the coated granule fails to release its nutrients more prevalent when the sulphur coating is too thick.

The granule is then coated with a polymer. This reduces the potential of catastrophic “burst” (premature release of nutrient) prevalent in sulphur coated urea products due to imperfections in the coating.

The PSCU coatings can be built up in layers the overall thickness dictates the longevity and diffusion rate which is dependent on moisture as the layers of polymer increase this extends the release time.

The longevity is regulated by moisture which is highly correlated with nutrient availability and uptake this ensures that when water availability initiates gradual breakdown of the polymer coat the osmosis increase the internal pressure on inner pool of nutrient slowly releasing the nitrogen to the rhizosphere.

Manage Cookie Consent
To provide the best experiences, we use technologies like cookies to store and/or access device information. Consenting to these technologies will allow us to process data such as browsing behavior or unique IDs on this site. Not consenting or withdrawing consent, may adversely affect certain features and functions.
Manage options Manage services Manage vendors Read more about these purposes
View preferences
{title} {title} {title}
Don't miss out on our latest technical updates and product innovations by signing up to our email newsletter:

Download a copy of our latest brochure today. Or, fill out your details in the form below and have to brochure sent to your email.

Download a copy of our latest brochure today. Or, fill out your details in the form below and have to brochure sent to your email.